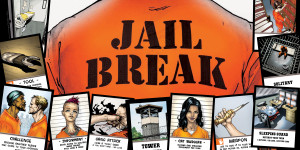 We have recently finished our work on Paper Street Comics’ latest creative venture.  The project is a tabletop game titled, Jail Break.  Yair Herrara and Chris Allen, the art team behind Careful… and Alpha, will be handling the artistic duties for the game designed by Victor Carungi.

Jail Break is a strategic card-based game that pits you against your friends in a race to escape the world’s most dangerous prison.  The game is unique in the fact that the prison layout and your individual mugshot profile will change with every game, so no two sessions will be the same!

Our efforts with Kickstarter just fell short of our goal, but we were lucky to find a company that could produce small press runs for our game.  We ran a crowd sale through The Game Crafter and it was a great success.  Now the first wave of production has been completed and anyone can buy the game through:

Listed below are reviews and feedback from people that have been kind enough to share:

The Bloodied Hex ran test sessions with the following feedback:

Game Trafficker.net ran several play-test sessions and some of their notes are below: 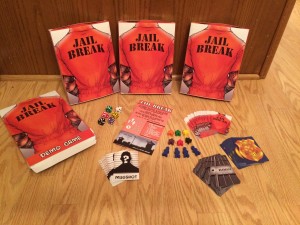